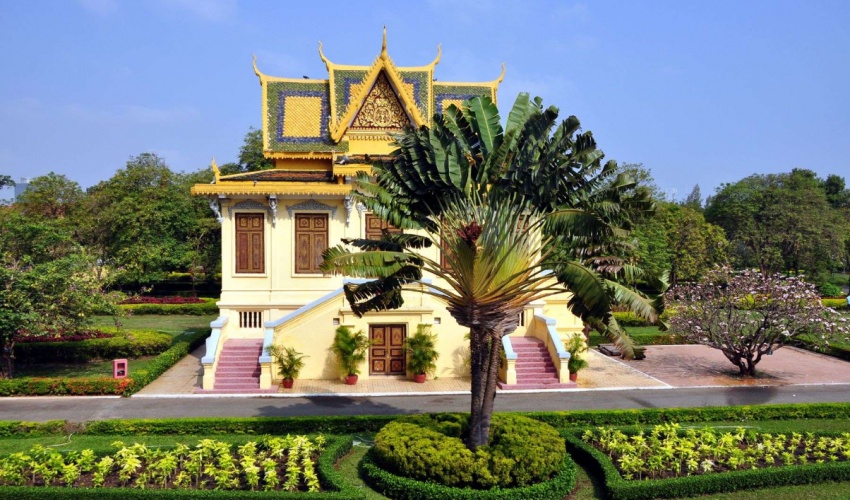 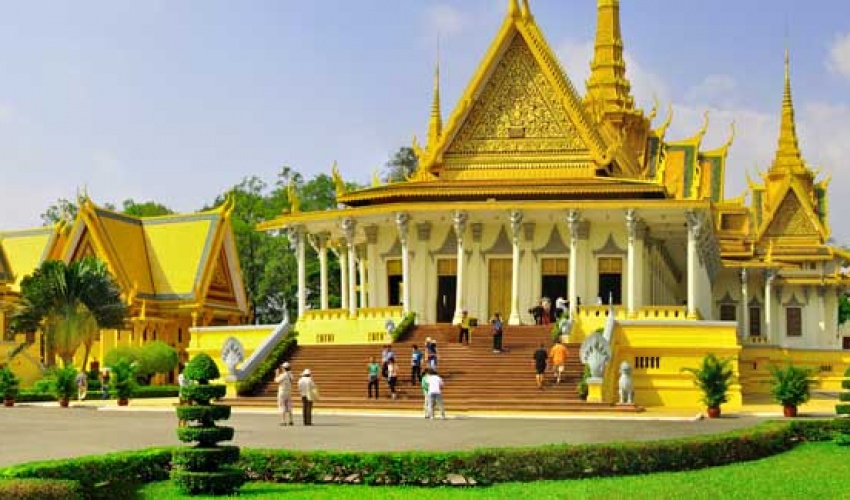 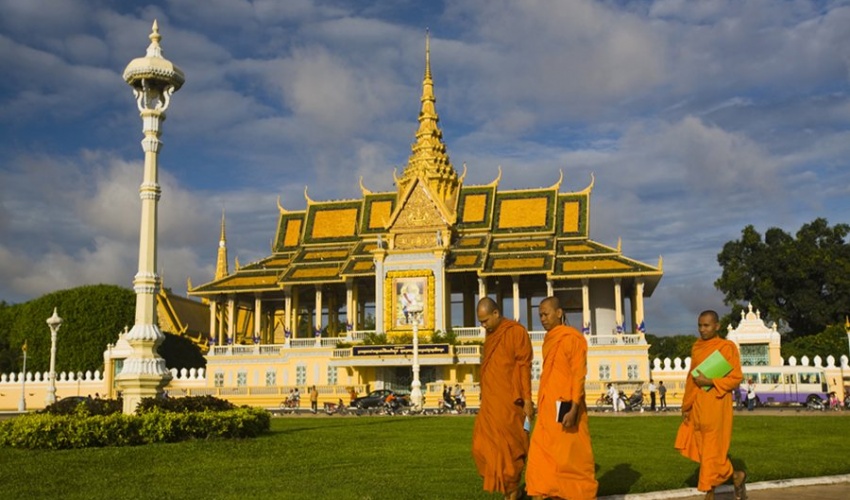 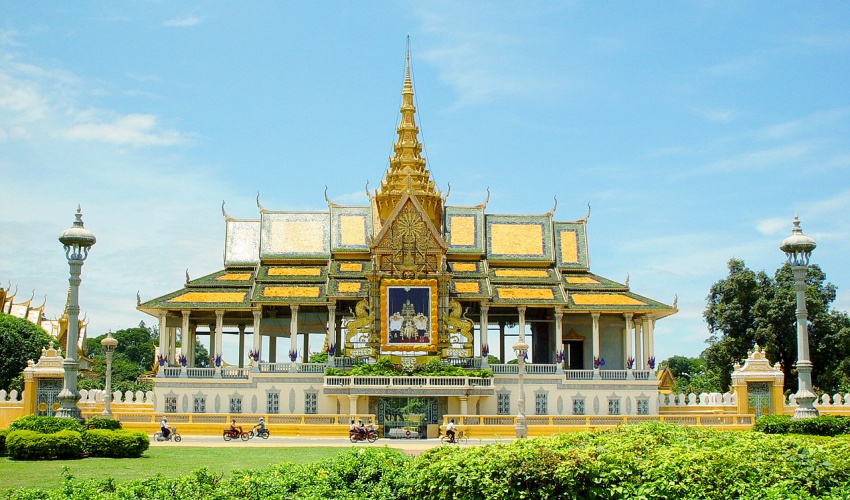 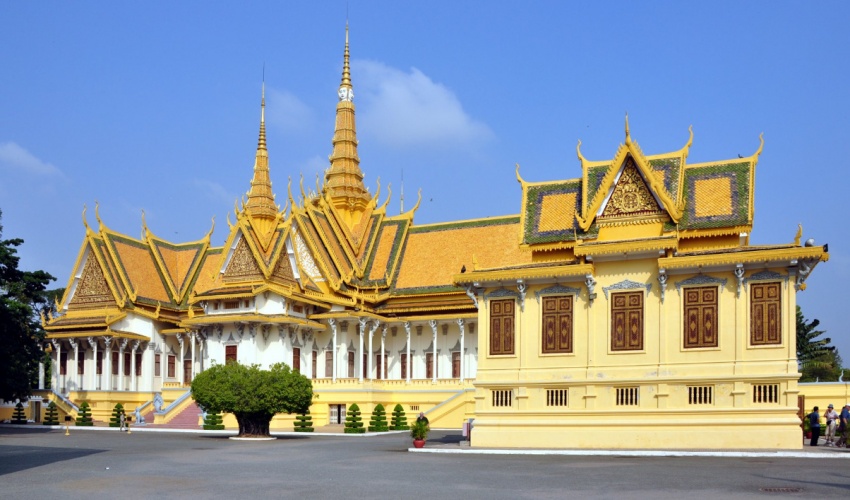 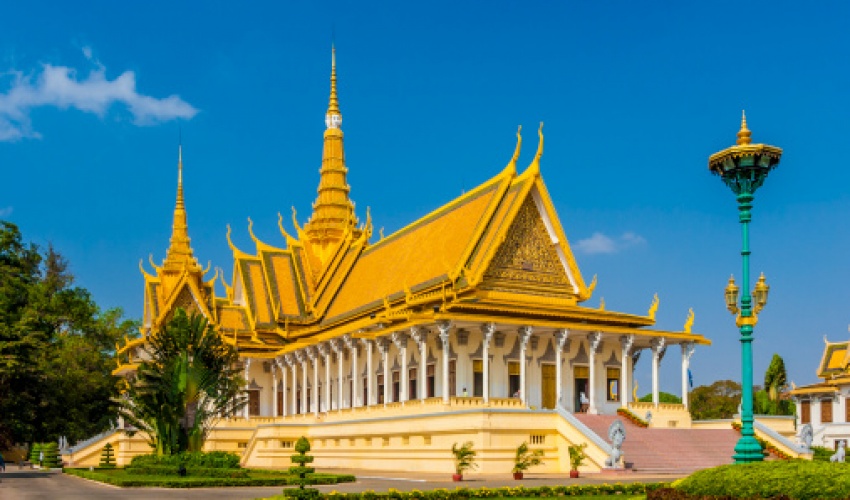 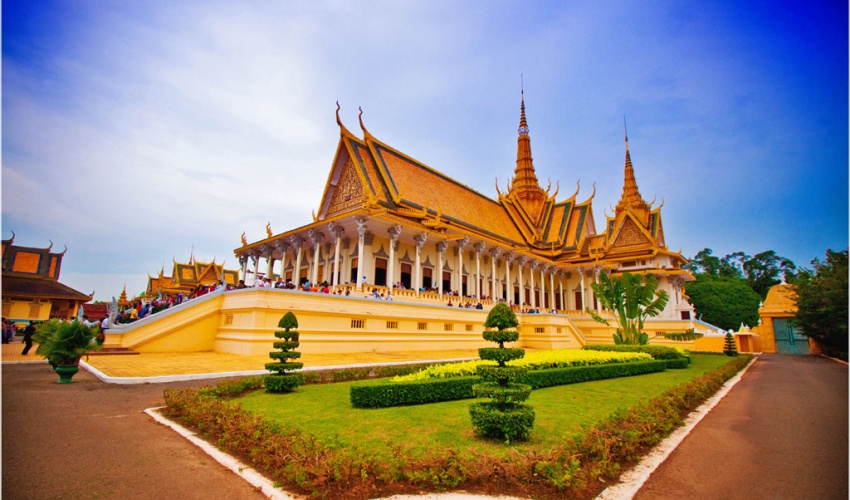 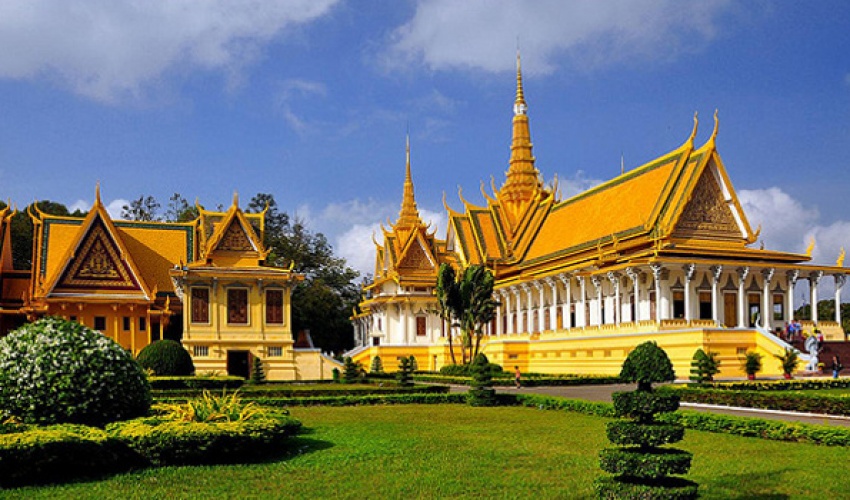 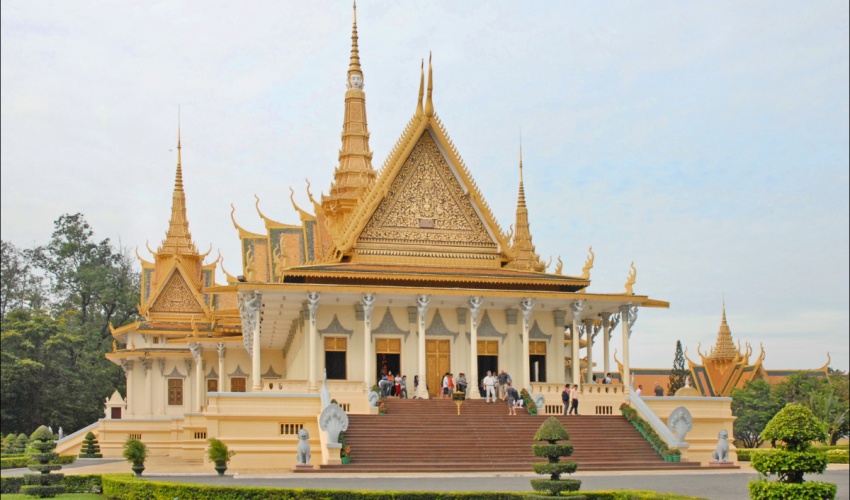 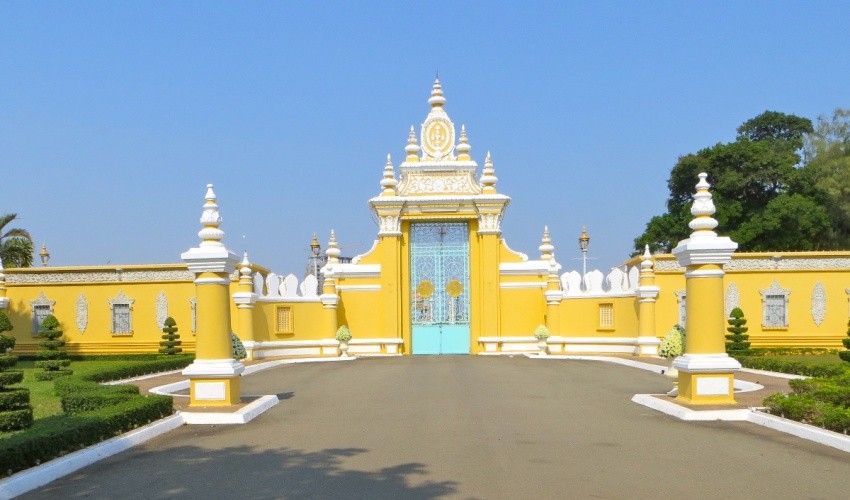 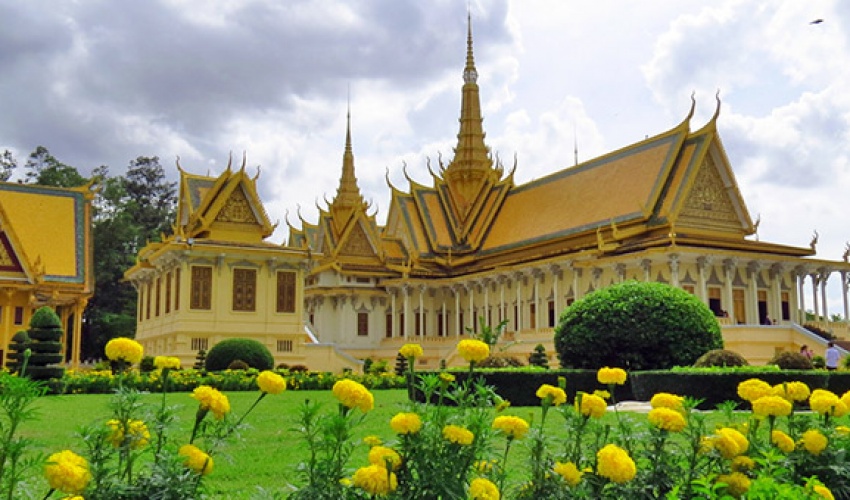 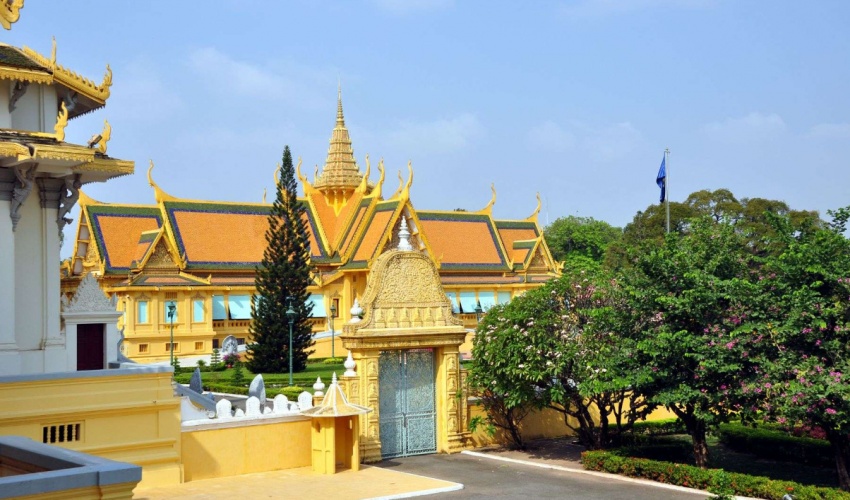 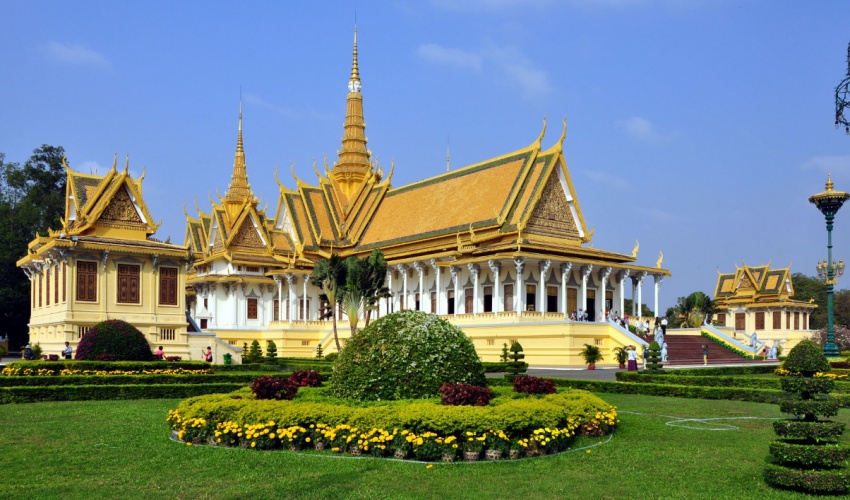 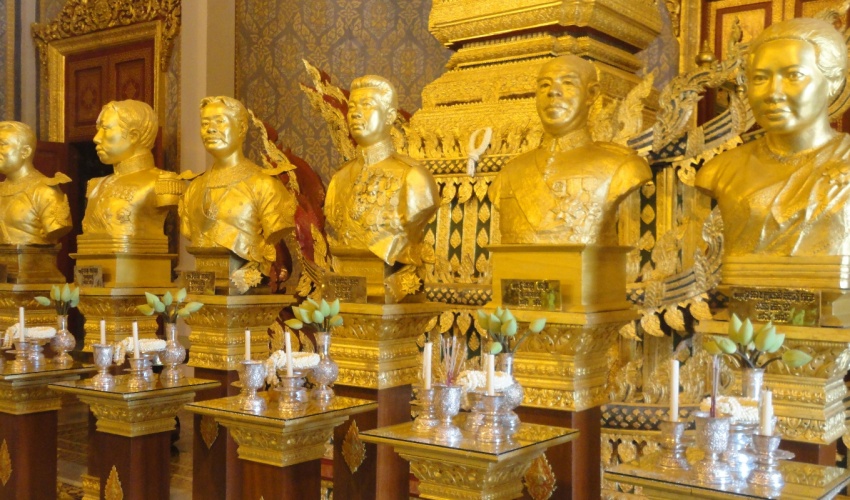 Gleaming in gold, the Royal Palace is one of Phnom Penh's most splendid architectural achievements. It is home to His Majesty Preah Bat smdech Preah Norodom Sihanouk and Her Majesty Preah Reach Akka-Mohesey Norodom Monineath. The palace was built in 1866 by His Majeaty Preah Bat Norodom, great grandfather to our current King. The Royal Palace is built on the site of the old town. This site was especially chosen by a Commission of Royal Ministers and Astrologers because it had great geographical significance in relation to the King, who was regarded as a direct descendant of the gods, whose role it was to live and govern on earth under the influence of heaven.
The Royal Palace contains some spectacular buildings. Not least of which is the Throne Hall, situated to the left of the main entrance. It boasts a 59-meter tower. The tower roof is beautiful, having been decoratively tiered with golden coloured tiles. This building is used for high official celebrations, coronations and audiences with foreign dignitaries and government officials.
The Roy al Treasury and the Napoleon II villa lie south to the Royal Throne Hall. North to this stands the Silver pagoda enclosure, otherwise known as the Pagoda of the Emerald Buddha. The Pagoda?s steps are crafted from Italian marble, and within the throne room the regal floor consists of more than 500 solid silver blocks. If calculated together, they weigh nearly six tones. Displayed a round the room, surrounding the main area, stand plush presents from foreign dignitaries.
The magnificent 17th century emerald Buddha statue is made of Baccarat cuystal and solid gold. It weighs 90 kilograms and is adorned with 9,584 diamonds. Bronze statues stand to it?s left and right sides. Next to these, encased under a glass cover, reside a golden locus. Within this area other ancient treasures include a large Buddha?s footprint, representing the 108 past lives of the Buddha before he was re-incarnated as Prince Siddharta, who subsequently gained enlightenment. On the wall, surrounding the Pagoda compound, (the oldest par of the palace) are hundreds of meters of frescos depicting an episode of the Indian epic Ramayana. These are the biggest mural frescos in South East Asia.
The Royal Palace sits between streets 184 and 240. The main entrance is situated on Samdech Sothearos Boulevard via the Pavilion of Dancers. Opposite the entrance sits another almost equally stunning Royal spectacle. The Royal Residence, along with their Royal Highnesses, houses the sacred white elephant, the most auspicious and reverd symbol of royal beneficence within Cambodia.