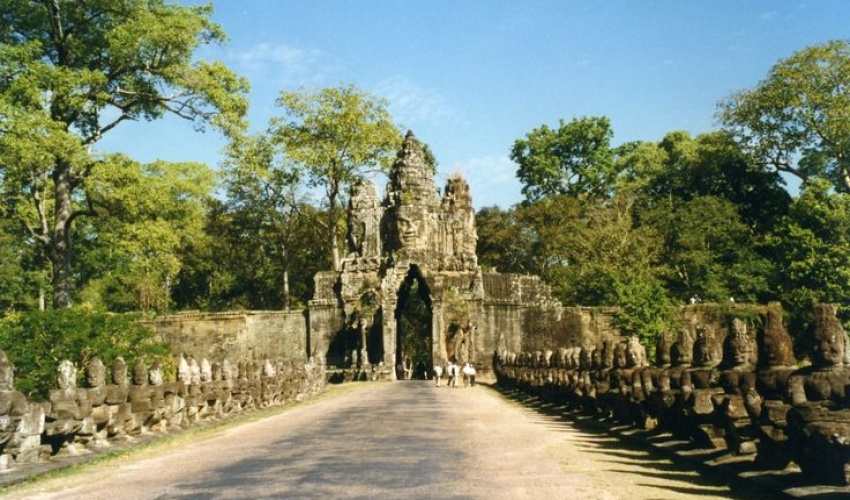 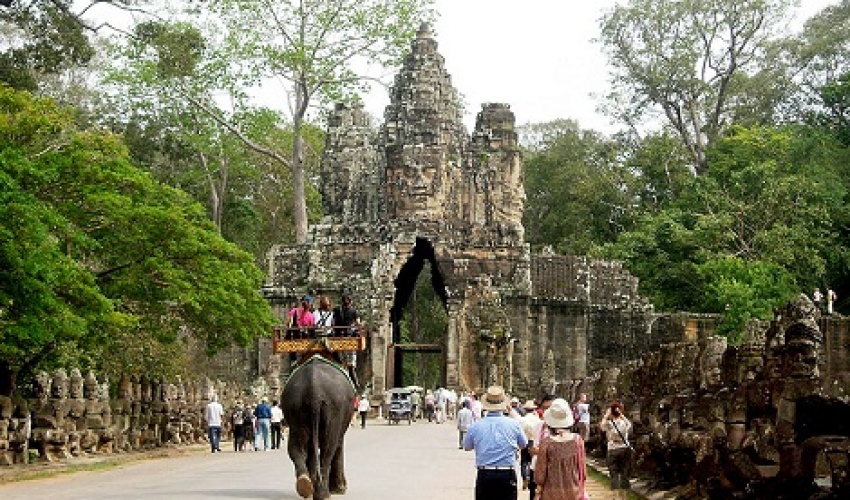 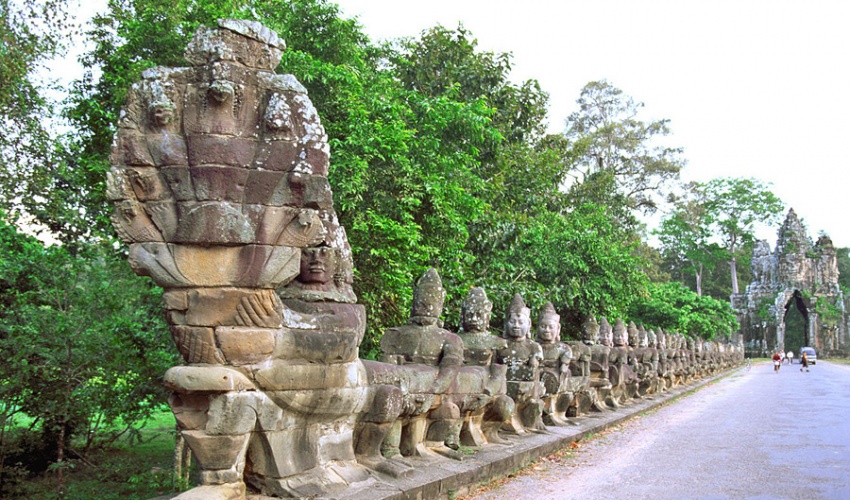 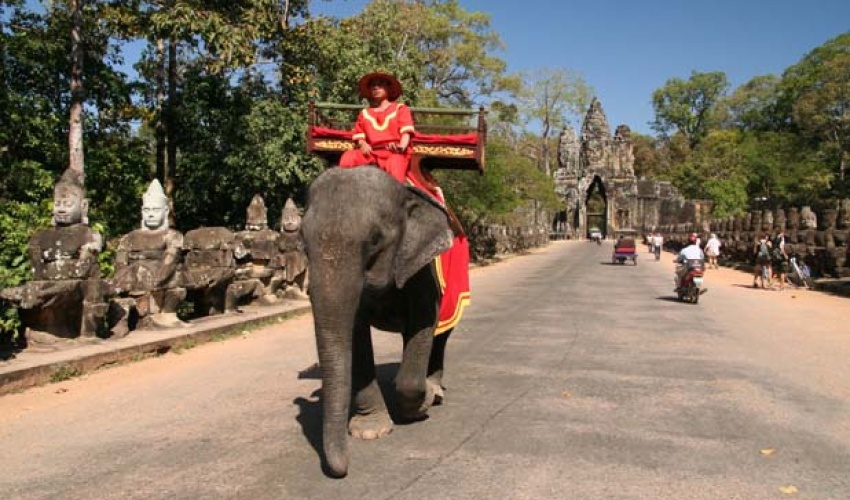 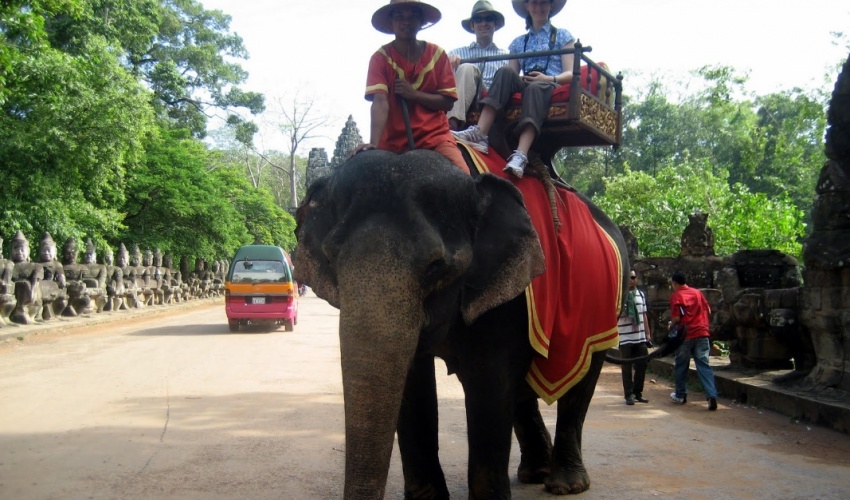 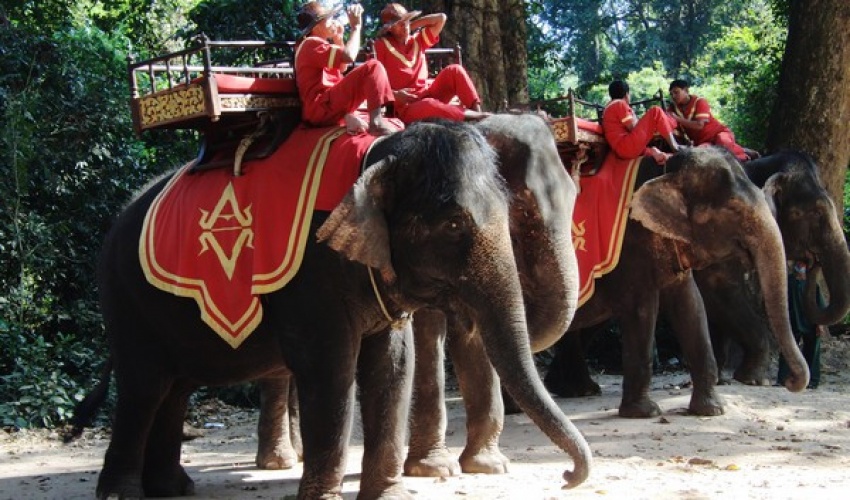 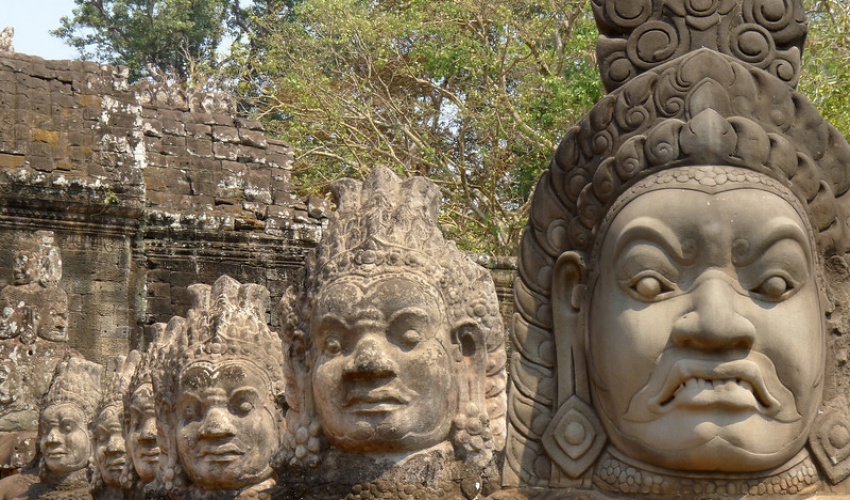 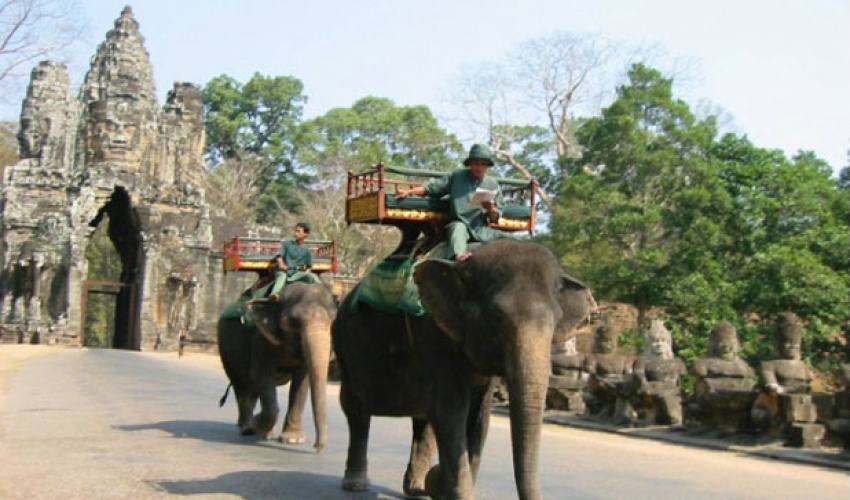 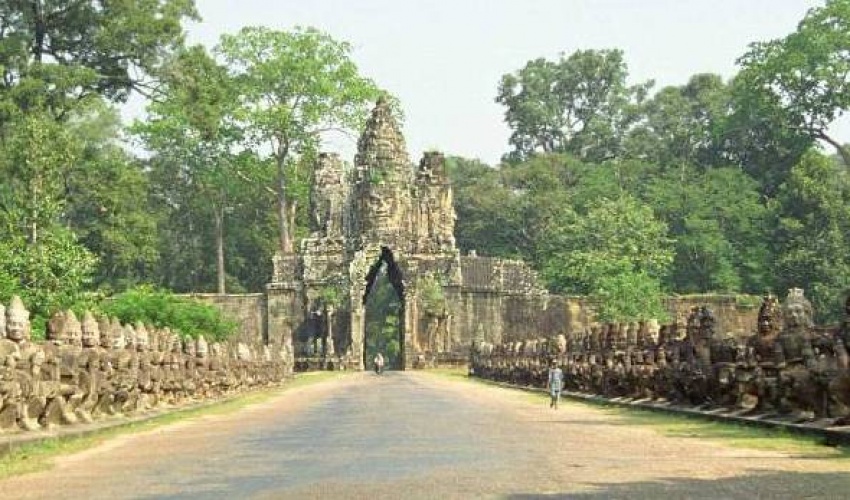 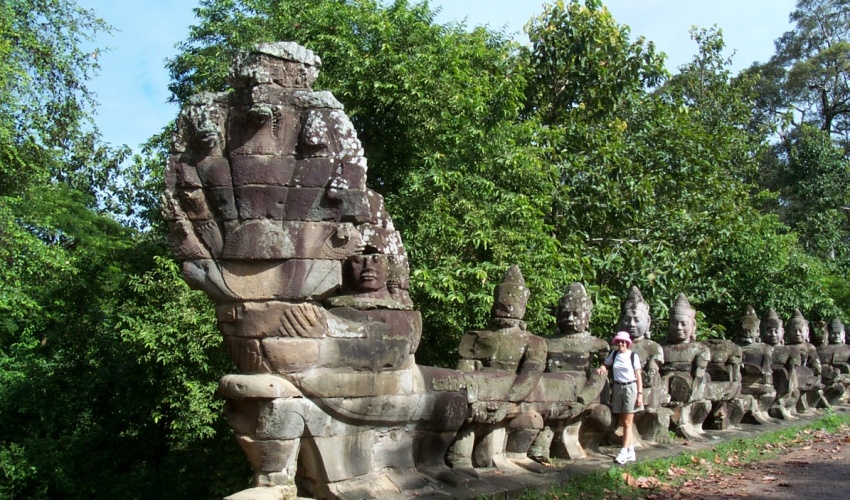 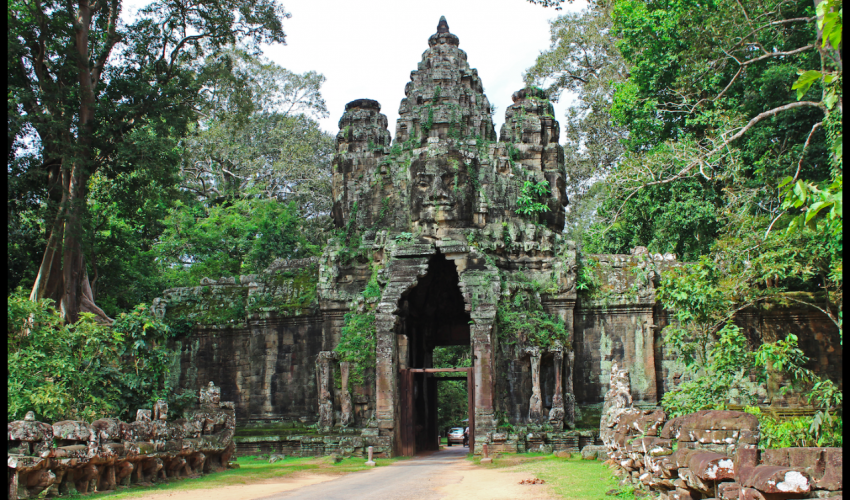 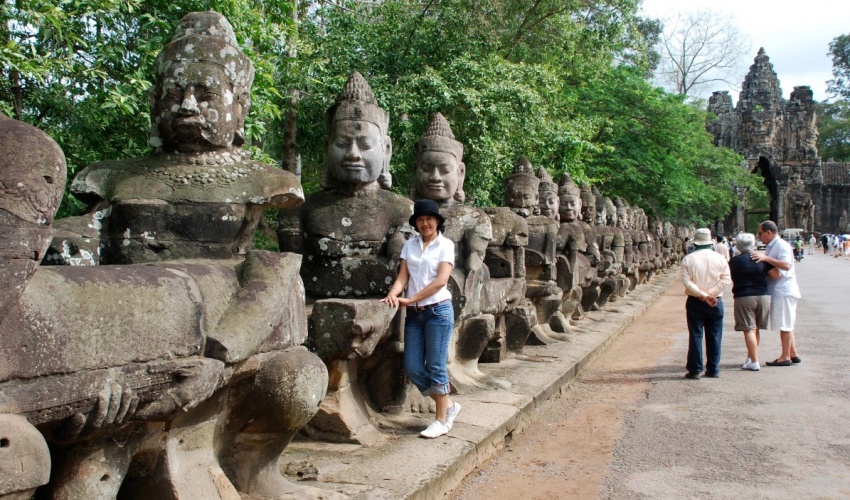 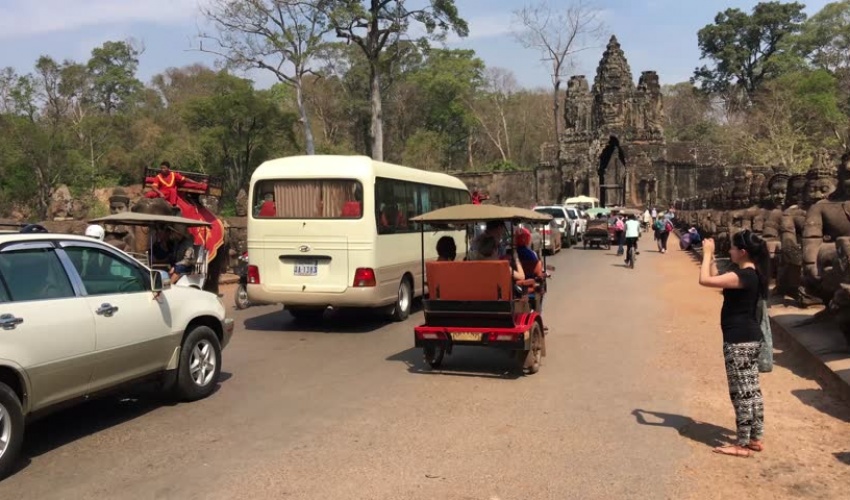 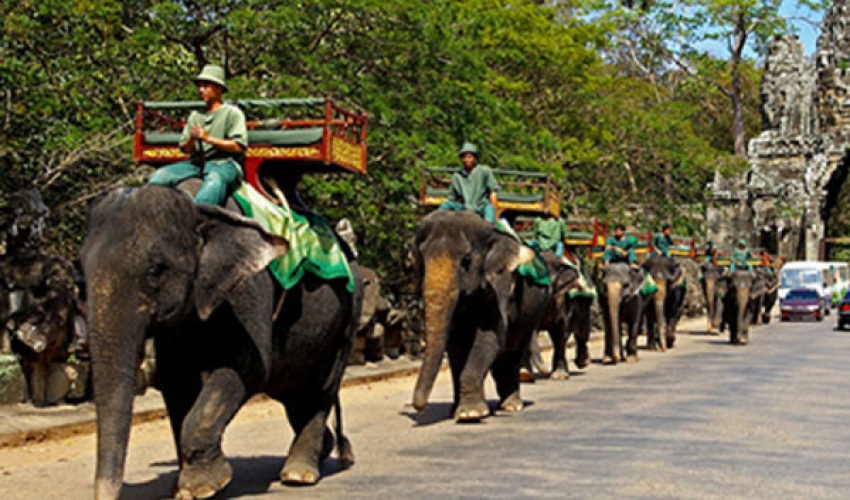 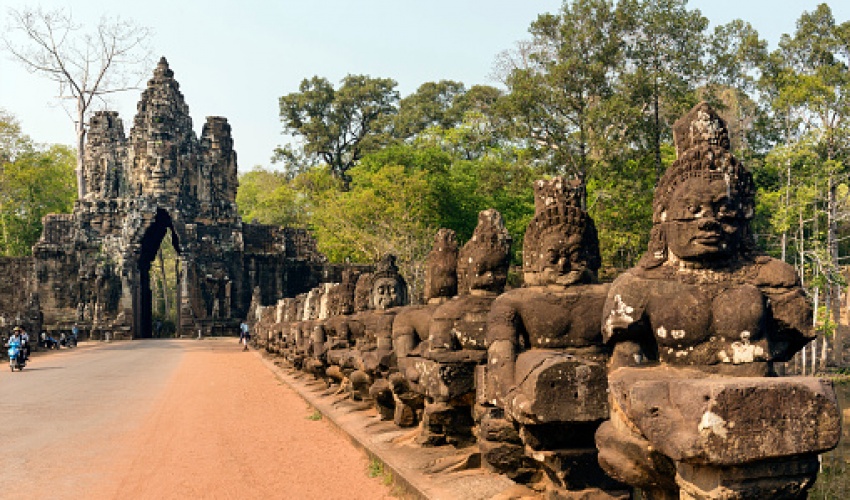 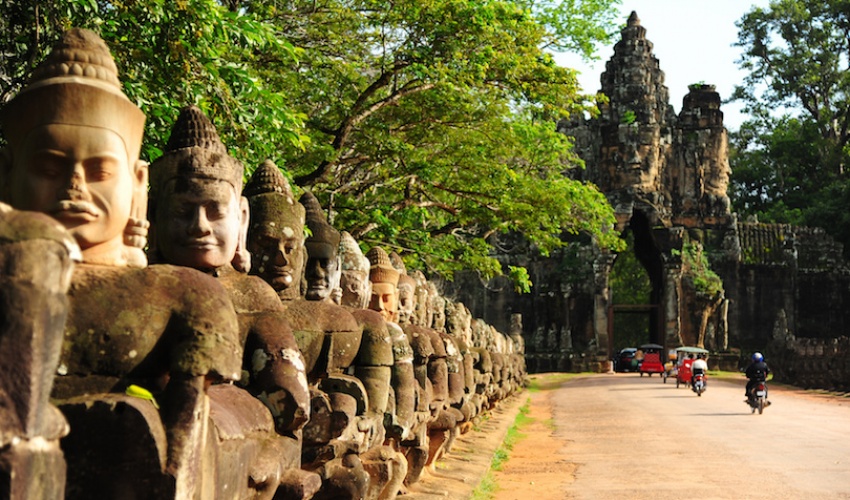 Angkor Thom was an ancient capital city of the Khmer Empire, which established since 10th century and lasted until the 15th century. Thus, the Angkor Thom served as Khmer capital city for approximately 500 years. Later, in the year of 1431 AD,this city had abandoned to some areas around Phnom Penh city now a days.

The reason of abandon the Angkor city, because the Thais attacked and destroyed during they occupied for about almost 100 years between the 14th to 15th century. Then causing the Khmer royal courts decided to abandon this city. Angkor controlled by the jungle. Although, in the Angkor area still living by Buddhist monks and peasants. But those people were not able to protect temple structures in Angkor from the invasion by the tropical rain forest at all, they just lived by themselves, since their life faced a difficulty of poverty, diseases, and warfare.

Angkor Thom has a meaning in Khmer is Great City. This city restored by king Jayavarman VII, after the war with Chams in 1177 to 1181 over. The king had drove out the Cham soldiers away and then he undertook to renovate Angkor Thom became a most powerful city in the world. He constructed the fortified stone wall for 8m in high and extensive for 3km on each side. The king also built five monumental gates one on each side except two on the east. To have two gates structures on the east side. Because the one is standing straight toward from the Bayon temple for using during the funeral ceremony, and another one standing axis to the Terrace of Elephants for using for alive people or called Victory gate.

Anyways, all the five gate structures have the same decoration. For example in each gate with 23m high decorated with the face of Compassionate Bodhisattva Avaloketesvara facing to four cardinal point, for express his concerns, his taking good care to the people in universal. Below the faces there are angles emerging from the cloud in an action of a pray. Then below the angles, there come with Indra statue who sitting on three headed elephants Aravata with his two wives Indrani and Sarasvati.

The motifs ornamented on the structure of Angkor Thom gates significant of mix between Buddhism and Hindu. Due to king Jayavarman VII was good toleration to all the religions, and because at that time Cambodian people believed in two religions Hindu and Buddhist . Then at the front of gate along the causeway,there are two rows of Demon and God from a Hindu myth of the Churning of the Sea of Milk with 54 statues on each side carrying Naga body in an action of tug of war. To have the motifs of the Churning of the Sea of Milkis significant of not too extreme and must work hard to get a good solution and success, But these statues had restored in 1920, before restoration these statues had been crumbled into the moat.

Moat which surrounding Angkor Thom has 100m cross. If we walk inside, at the wall there is a dirt embankment for 20m wide for protect the wall stay strong and also to serve as a road always round the city wall for 12km.

Within the wall of the Angkor Thom originally was a residence for royalty, dignitary families, Brahmin priests, merchants, artisans and soldiers so on. Those residences built of woods and always on stilt. If the ordinary people they dare not paint their roof house, in order to prevent from the confusing of the royalty or Brahmin families houses. However, today where used to be the city, but now is jungle.

Today government protect this jungle from cutting and allow only five Buddhist monasteries to settle since 1982. The idea to have monks in the Angkor Thom vicinity because the government wanted those monks' help from smugglers looted artifacts from the Angkor site.