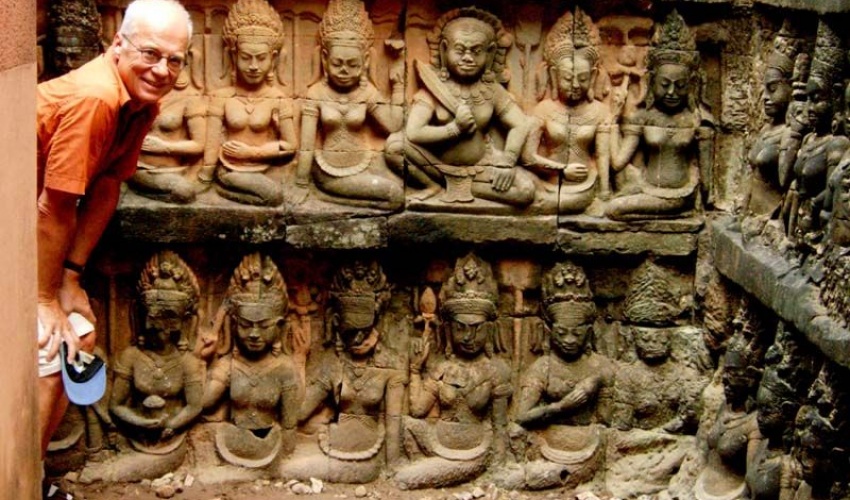 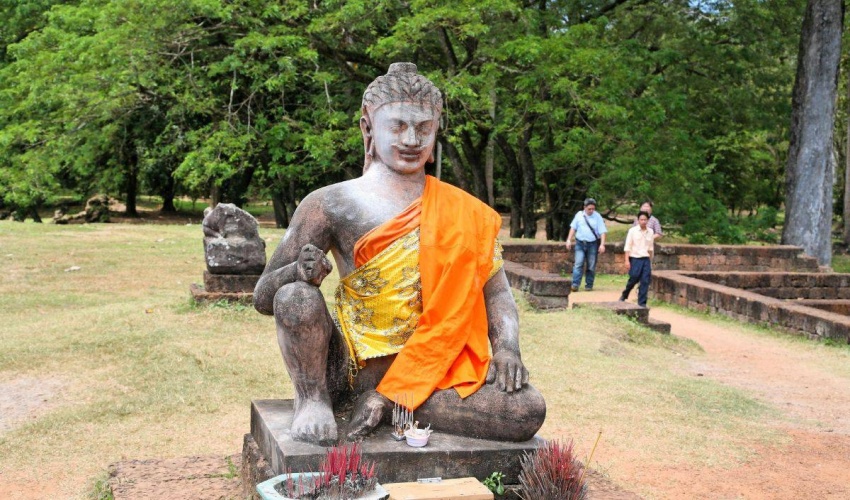 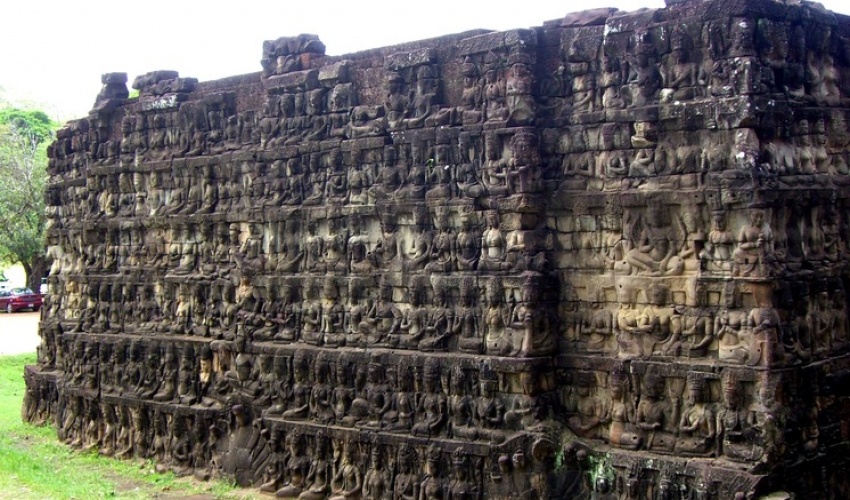 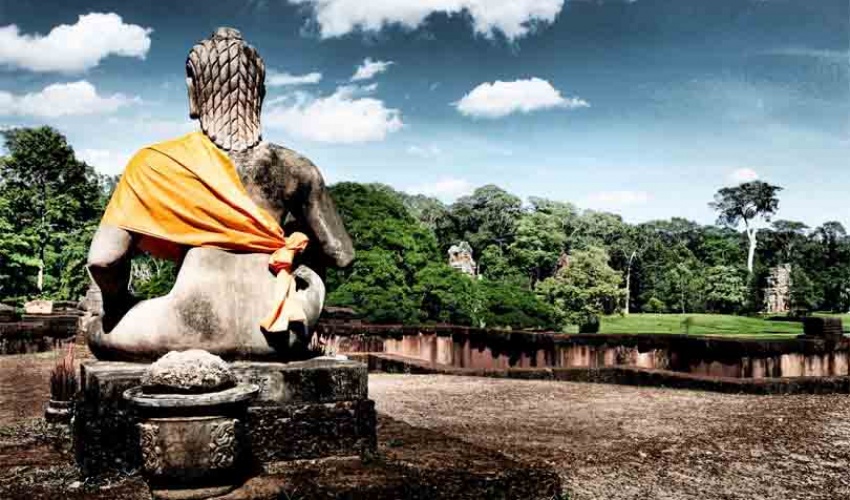 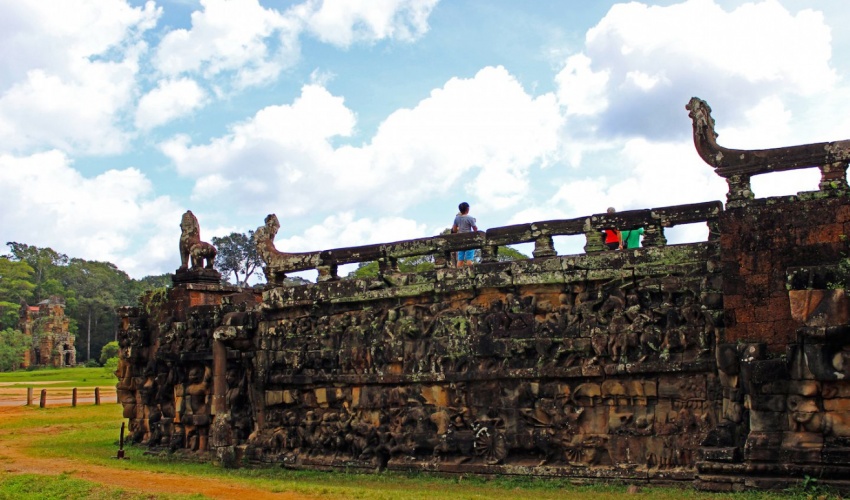 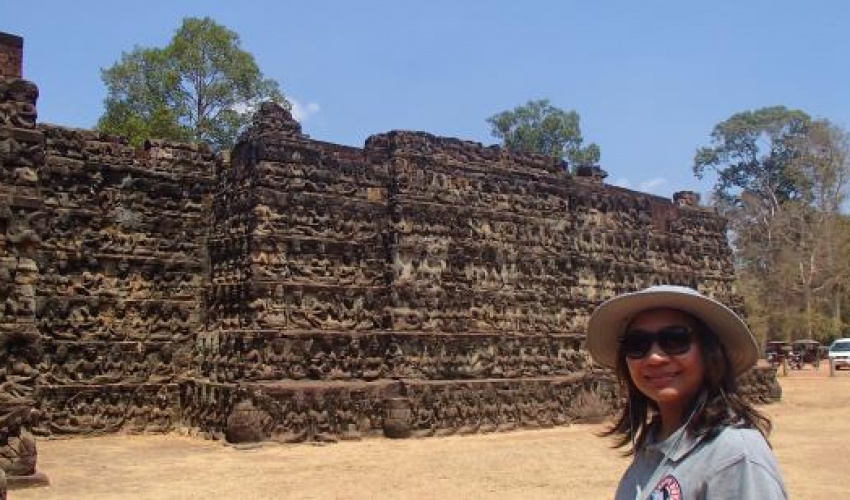 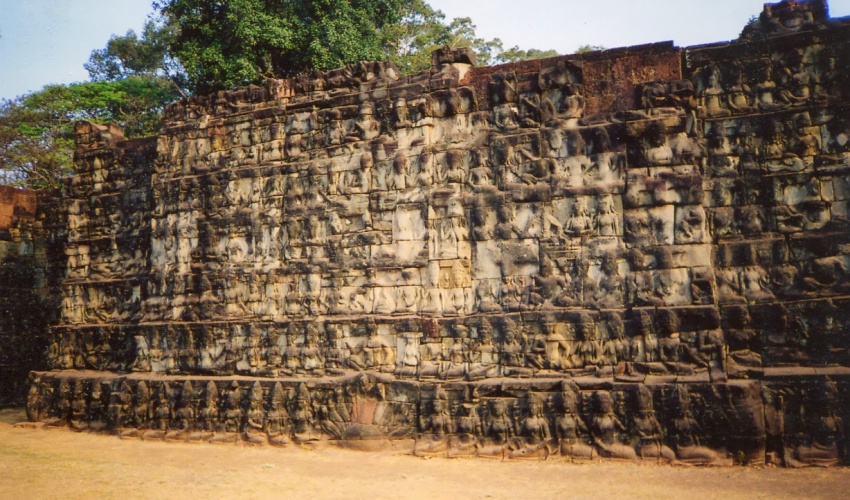 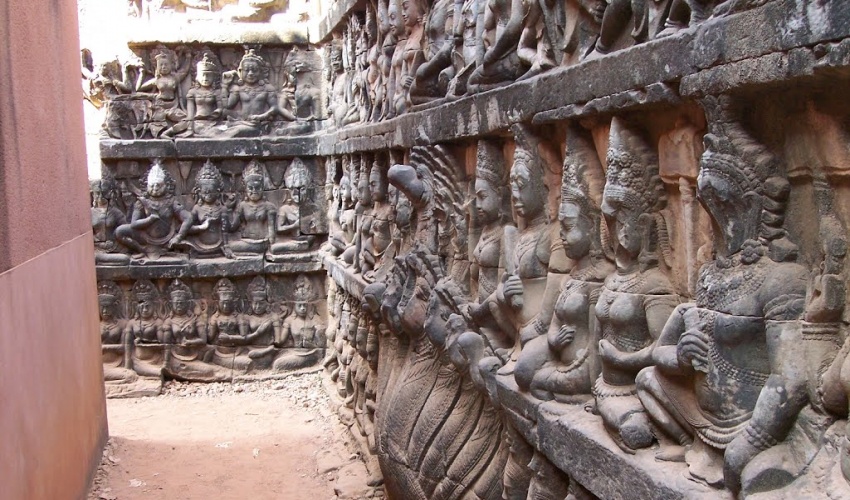 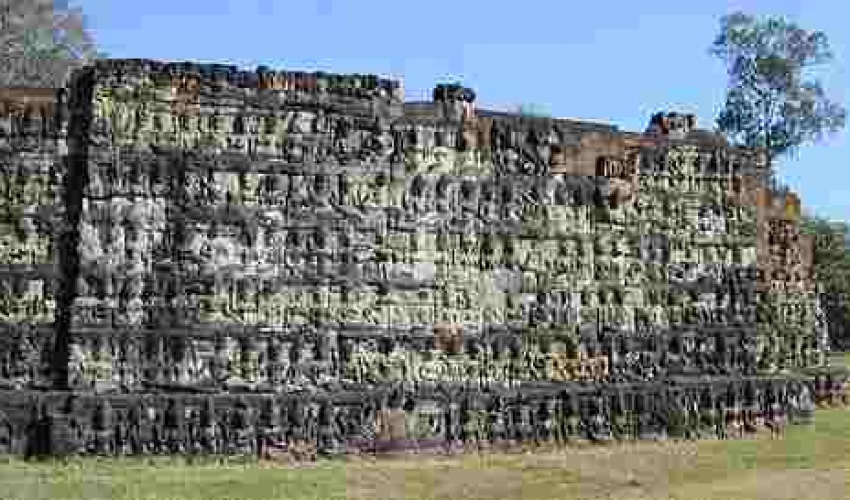 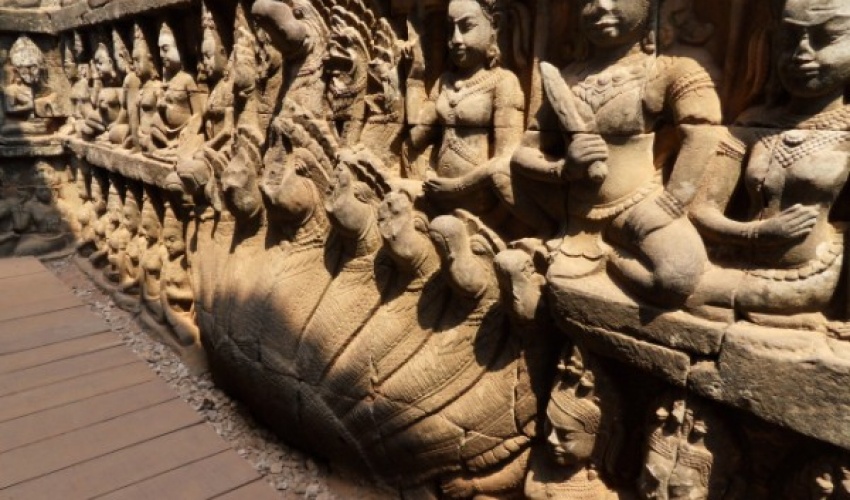 The stone monarch is absolutely naked, his hair is plaited and he sits in the Javanese fashion. The legs are too short for the torso, and the forms, much too rounded, lack the strong protuberances of manly muscles; but, however glaring are his defects, he has many beauties, and as a study of character he is perhaps the masterpiece of Khmer sculpture. Whilst his body is at rest his soul boils within him. His features are full of passion, with thick lips, energetic chin, full cheeks, aquiline nose and clear brow... his mouth, slightly open, showing the teeth. this peculiarity of the teeth being shown in a smile is absolutely and strangely unique in Cambodian art. Terrace of the Leper King is located immediately north of the Terrace of the Elephants and it can be accessed from the main road. It was built at end of the 12th century by king Jayavarman VII (reigned 1181-1220).
The terrace of the Leper King carries on the theme of grandeur that characterises the building during Jayavarman VII's reign. It is faced with dramatic bas-reliefs, both on the interior and exterior. During clearing, the EFEO found a second wall with bas-relief similar in composition to those of the outer wall. Some archaeologists believe that this second wall is evidence of a late rites, two meters wide of laterite faced with sandstone. It collapsed and a second wall of the materials, two meters wide, was built right in front of it without any of the rubble being cleared. Recently, the EFEO has created a false corridor which allows visitor to inspect the relief on the first wall.

The curious name of this terrace refers to a statue of the Leper King that is on the platform of the terrace. The one you see today is a copy. The original is in the court-yard of the National Museum in Phnom Penh. the figure is depicted in a seated position with his right knee raised, a position some art historians consider to be Javanese-style. Its nakedness is unusual in Khmer art. Who was the Leper King ? Mystery and uncertainty surround the origin of the name. The long-held theory that Jayavarman VII was a leper and that is why he built so many hospitals throughout the empire has no historical support whatsoever. Some historians think the figure represents Kubera, god of wealth, or Yasovaraman I, both of whom were allegedly lepers. Another ideas is based on an inscription that appears on the statue in characters of the 14th or 15th century which may be translated as the equivalent of the assessor of Yama, god of death or of judgment. Yet another theory suggests that the Leper King statue got its name because of the lichen which grows on it. The position of the hand, now missing, also suggests it was holding something. Coedès believes that most of the Khmer monuments were funerary temples and that the remains of kings were deposited there after cremation. He thinks, therefore, that the royal crematorium was located on the Terrace of the Leper King. The statues, then, represents the god of death and is properly situated on the terrace to serve this purpose. Yet another theory derives from a legend in a Cambodian chronicle that tells of a minister who refused to prostrate before the king, who hit him with his sword. Venomous spittle fell on the king, who then became a leper and was called the Leper King thereafter.